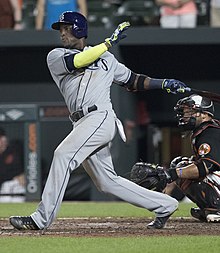 Tim somehow took 3 out of 4 games from John. In the 4th game, Tim was up, 1-0 in the top of the 9th when John tied the game on a wild pitch. But, in the bottom of the 10th, slugger Adeiny Hechavarria stepped up and rolled a 1-4 HR 1-6 with a beautiful 3 on the 20-sided for the walkoff win. Hechy cannot be stopped. Paul took 3 of 5 from Phil’s team, who can’t seem to decide whether they are good or not. Rich took 4 of 5 from Bob while making a concerted effort to kill all of Bob’s pitchers. Rich rolled 6-12 eight times in the series, but only managed 2 injuries. Next week, Bob gets to use the league’s emergency pitcher. Dougald will play Mark and Robert will play Chris at a later time.