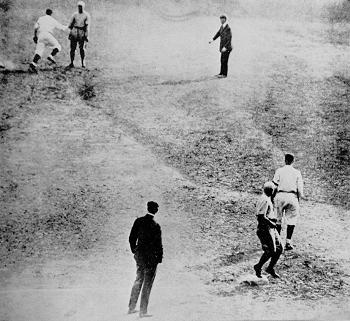 Last night Tim and Phil had a wild series. In game 3 of the series, Phil was leading, 5-1 and Corey Knebel walked the first two batters. David Peralta then got up and hit into a TRIPLE PLAY, plus injury. Peralta luckily wasn’t hurt. Tim rallied back to score 3 in the 7th. In the 8th, Starling Marte singled, stole second, moved to third on a groundout, and scored on a wild pitch by Reyes Moronta to tie the score. The game went to extra innings. In the top of the 11th, Matt Carpenter pulled one into the right field stands to put Phil ahead. Then, in the bottom of the 11th, with one out, Xander Bogaerts homered to tie it up. Southpaw Jace Fry, the last man in the pen, came in in the 13th and was weak in the 14th. Fry battled, though, pitching shutout ball through the 17th. He was guided by Adam Eaton, who had to put on the tools of ignorance when Gary Sanchez got ejected for arguing after Sanchez struck out in the 15th. In the bottom of the 17th, Matt Olson singled with one out. Xander Bogaerts then doubled to left. It was 1-10 to score, but with the pitcher due up next, Tim sent the runner. The roll was an 8, and the game was mercifully over, but not before Phil’s pitchers had struck out 22 of Tim’s batters (possibly a new league record). Julio Teheran and what was left of the bullpen then outdueled Justin Verlander in the 4th game to give Tim a 3-1 series victory.

In other action, Chris’ team continued to roll, taking 3 of 4 from John and moving within a game of Phil for 2nd place. Bob and Dougald, battling for the division lead, split. No lead was safe in that series, as Bob came roaring back to overcome 5 or more run leads multiple times. The series result left Dougald a game back, but he was leapfrogged by Robert, who took 3 of 4 from Mark to move into a tie for first place in the division. Paul took 3 of 4 from Rich, despite a disappointing outing by newly acquired Corey Kluber. In other news, Carlos Correa was so upset about being traded to Rich’s team that he threw himself off a one-story building and broke his ribs.