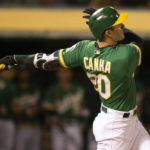 We welcomed new player Marcus to the league last night. He played for Dougald against John and, in his first at-bat, Mark Canha homered. An auspicious start. He only managed to take 1 of 4 from John, but he is the first manager this year to beat John at all, so it’s some accomplishment.

In other news, Tim lost the first game to Paul and then roared back to take the next 3. Bob broomed Chris. Robert took 3 of 4 from Mark. Rich and Phil split.

Team John is on a roll. After wiping out Tim last week, he continued his winning ways by stomping on Rich’s team and sweeping 4 games. John out-homered Rich, 16-6. Paul played for Tim, who was sick, and took 3 from Phil. Robert took 3 from Dougald. Mark and Bob split. 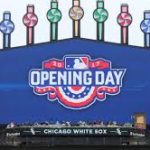 And so it begins…

Before the season, Tim’s main concern was that his pitching would not be up to par. Naturally, in the first series of the year he was swept by John and scored a total of 5 total runs in 4 games while his pitching was very effective, allowing only 12 runs. 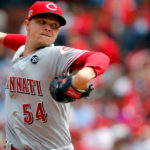 The 2020 draft has been completed and much fun was had by all. The first pick, by Chris, was Sonny Gray. 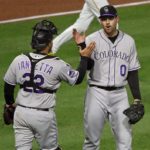 Tim finally won – in his 5th trip to the World Series, and 6th trip to the playoffs in 13+ seasons – narrowly defeating Dougald in 7 games. He is the Buffalo Bills no more.

Dougald took game 1, 5-1, and game 2, 7-4, in Tim’s park. In game 2, Mike Clevinger was unable to get out of the second inning, so Tim brought in Jared Hughes, who promptly got hurt. This put a bit of a crimp in the bullpen, so Tim replaced Hughes with Carlos Carrasco and his 7 available innings of relief, even though Carrasco would not be available until game 4.

Dougald’s park seemed to revitalize Tim’s offense, and Tim took the next two games, 8-1 and 8-5. In game 5, Dougald lost Zack Greinke for the remainder of the game in the 2nd inning and had to use his bullpen the rest of the way. The score was tied going to the bottom of the 8th when Dougald rolled 6 walks in a row in the process of scoring 3 runs, and held on to win, 4-1.

Back to Tim’s park, where it was JA Happ against Luis Severino (who had been roughed up in a complete game loss in game 3). Happ and the bullpen were up to the task, including 3 big innings by Carlos Carrasco, and held Dougald scoreless for the 3-0 win. Game 7 was a nail-biter, as Tim seemed to constantly have the bases loaded but was unable to break out while Dougald was also having trouble coming up with timely hits. In the end, Tim held on, 4-1, with Adam Ottavino pitching the final 1 2/3 innings for the save.

Thank you to everyone for a fun, competitive season and we’ll see you at the winter meeting on January 20th.

Paul, who had the best record in the league, lost 4 games to 1 to Dougald. Paul’s team just never got on track offensively.

In the Tim-Robert series, injuries were a huge story. Robinson Cano, Yasiel Puig, Ronald Acuna, and Carlos Carrasco were hurt and replaced for the series. Cano is out for the playoffs. That matters because everything went Tim’s way (beyond the injuries) and Tim swept Robert.

The World Series, starting with Game 1, Dougald at Tim, will be Tuesday.

Results last night. It came down to the wire to sort out the divisions. Robert and Rich split 4, but Robert clinched a playoff spot. Bob took 3 of 5 from John, but finished 2 games out of the playoffs. Phil swept 5 games from Chris. Dougald clinched the playoffs and took 4 of 5 from Mark. Tim took 4 of 5 from Paul. Robert took game 161 from Dougald to clinch first place. Thus Robert will play Tim in the playoffs and Paul will face Dougald. Please make a list of your playoff roster before you come to play to save time and don’t forget to name a starter as a reliever if you choose. The order of the first round of the draft is Chris Robert Dougald Rich Phil John Dougald Chris Robert Mark. 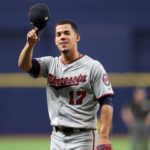 As the season comes down to the wire, we had some important games last night.

With two weeks left, the below are the magic numbers for the teams currently in playoff position to make the playoffs: 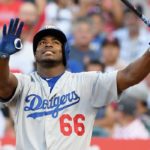 In last night’s action, as we roll toward the end of the season, Bob took 3 of 4 from Paul and put some pressure on the Dougald-Robert series (to be played). Phil held serve and took 3 of 5 from Rich. Dougald, playing for Chris took 3 of 5 from Tim. It would have been 4 of 5, but Yasiel Puig hit a walk-off 3-run homer in the 5th game off of Jordan Hicks to overcome a 1-run deficit. John took 3 of 5 from Mark.